The first atomic clock, developed near this site by Harold Lyons at the National Bureau of Standards, revolutionized timekeeping by using transitions of the ammonia molecule as its source of frequency. Far more accurate than previous clocks, atomic clocks quickly replaced the Earth’s rotational rate as the reference for world time. Atomic clock accuracy made possible many new technologies, including the Global Positioning System (GPS).

One remaining piece of the old National Bureau of Standards (NBS) campus remains, a pair of stone columns that once served as an entrance to the NBS campus (see photograph below from Google Maps, the two columns are circled in the photo). The columns make up the border of another little park, also owned by the U. S. State Department.

The plaque is mounted outdoors on a bronze stand. There will also be a duplicate plaque on the NIST campus for NIST employees to view.

The site is publicly accessible in an outdoor location. The area is regularly patrolled by security/police officers.

A duplicate copy of the plaque will be mounted in the lobby of the Administration Building at the National Institute of Standards and Technology in Gaithersburg, Maryland (100 Bureau Drive, Gaithersburg, MD, 20899). This site is approximately 18 miles (29 km) away from the site of invention by car, but will allow NIST employees and visitors who pass through security to view the plaque. NIST visitors can normally pass through security if sponsored by a NIST employee.

The societal impact of atomic clocks has been immense. Many technologies that we take for granted rely on atomic clock accuracy, including mobile phones, Global Positioning System (GPS) satellite receivers, and the electric power grid.

Atomic clocks fundamentally altered the way that time is measured and kept. Before atomic clocks, the second was defined by dividing astronomical events, such as the solar day or the tropical year, into smaller parts. This changed in 1967, when the second was redefined as the duration of 9 192 631 770 energy transitions of the cesium atom. The new definition meant that seconds were now measured by counting oscillations of atoms, and minutes and hours were now multiples of the second rather than divisions of the day.

Atomic clocks also enabled astounding gains in timekeeping accuracy. For thousands of years prior to the invention of atomic clocks, the reference for world timekeeping was the Earth’s rotation rate, which was limited in accuracy to about one millisecond (one part in 10^8) per day. Quartz oscillators first appeared in the 1920s. The best quartz devices were eventually accurate enough to measure and record variations in the Earth’s rotation, but they were still limited in performance and sensitive to environmental changes. Atomic clocks provided a “quantum leap” in accuracy. Shortly after their invention, accuracies of parts in 10^10 became routine, and the accuracy of atomic clocks constructed at NBS and its successor, the National Institute of Standards and Technology (NIST), has increased by roughly one order of magnitude per decade as shown in the illustration below. 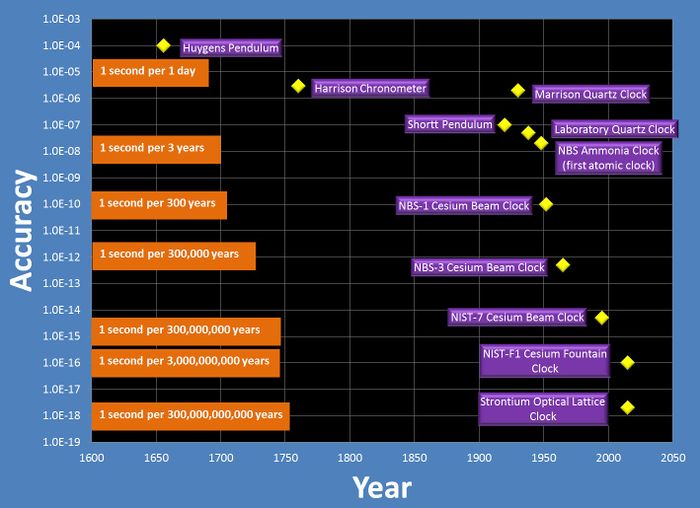 The Scottish physicist James Clerk Maxwell was perhaps the first to recognize that atoms could be used to keep time. In an era where the Earth’s rotation was the timekeeping standard, Maxwell remarkably suggested to William Thomson (Lord Kelvin) that the “period of vibration of a piece of quartz crystal” would be a better absolute standard of time than the mean solar second, but would still depend “essentially on one particular piece of matter, and is therefore liable to accidents.” Atoms would work even better as a natural standard of time. Thomson wrote in the second edition of the Elements of Natural Philosophy, published in 1879, that atoms such as hydrogen or sodium are “absolutely alike in every physical property” and “probably remain the same so long as the particle itself exists.”

Even so, atomic clock experiments didn’t begin until about sixty years after the suggestions of Maxwell and Thomson. The early experiments were finally made possible by the rapid advances in quantum mechanics and microwave electronics that took place before, during, and after World War II. Most of the concepts that led to atomic clocks were developed by Isidor Isaac Rabi and his colleagues at Columbia University in the 1930’s and 40’s. As early as 1939, Rabi had informally discussed applying his molecular beam magnetic resonance technique as a time standard with scientists at NBS. Rabi and his colleagues at Columbia first measured the cesium resonance frequency in 1940, estimating the frequency of the hyperfine transition as 9191.4 megacycles. This was relatively close to the number that would later define the second. Rabi’s work led to a Nobel prize in 1944, but atomic clock research at Columbia was mostly halted during World War II as scientists turned their attention to other areas and a demonstrable device was not built.

Building on the accomplishments of previous researchers, Harold Lyons and his colleagues at NBS in Washington, DC began working towards the development of the first atomic clock in 1947. The NBS clock was based not on cesium atoms, but instead used the 23.8 GHz inversion transition of the ammonia molecule as its source of frequency. After a period of intense and rapid research and development beginning in the spring of 1948, the new clock was first operated on August 12, 1948 and was publicly demonstrated in January 1949. Although its accuracy was quickly surpassed by other atomic clocks, it marked the beginning of the era of atomic timekeeping. 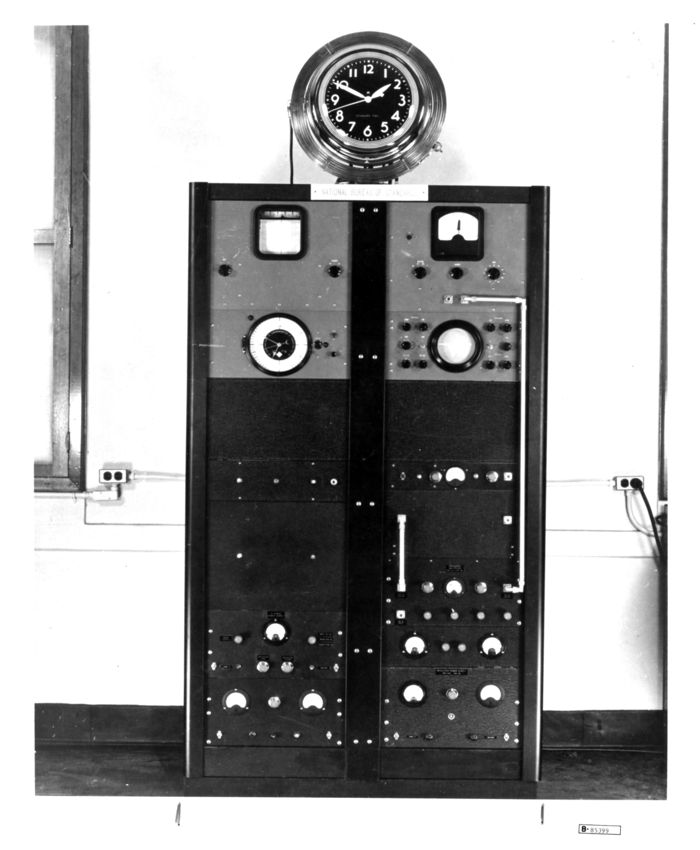 The world's first atomic clock as it appeared on January 6, 1949, the day of the first public announcement. An ammonia absorption cell consisting of about 8 meters of K-band waveguide is coiled around the round electric clock dial. The clock atop the equipment racks was driven by a 50 Hz signal obtained by dividing the signal from a quartz oscillator that was locked to the ammonia absorption frequency. However, its primary function was to let the world know that the new invention was indeed a clock. 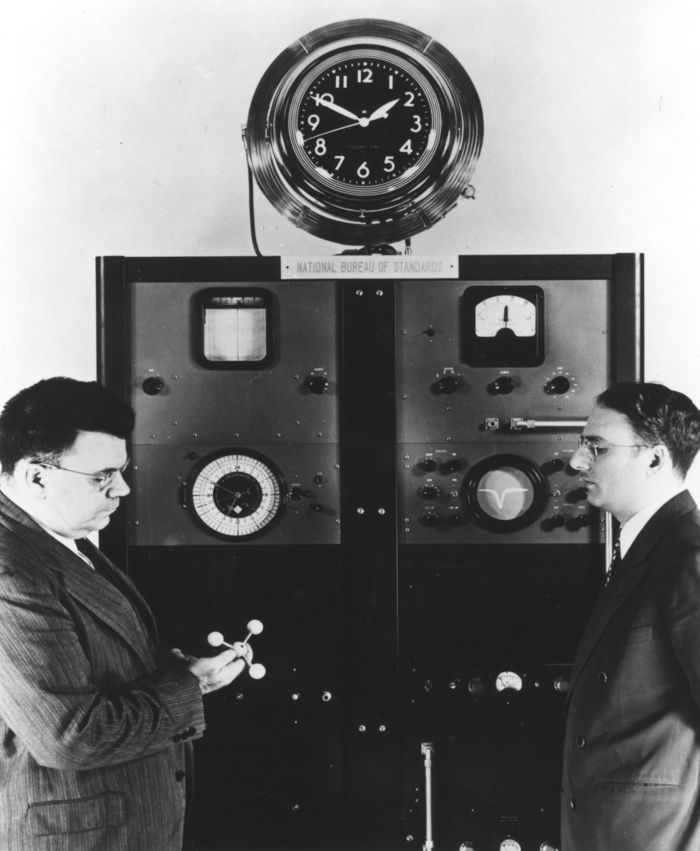 Dr. Harold Lyons (right), inventor of the ammonia absorption cell atomic clock, observes, while Dr. Edward U. Condon, the director of the National Bureau of Standards, examines a model of the ammonia molecule (1949). 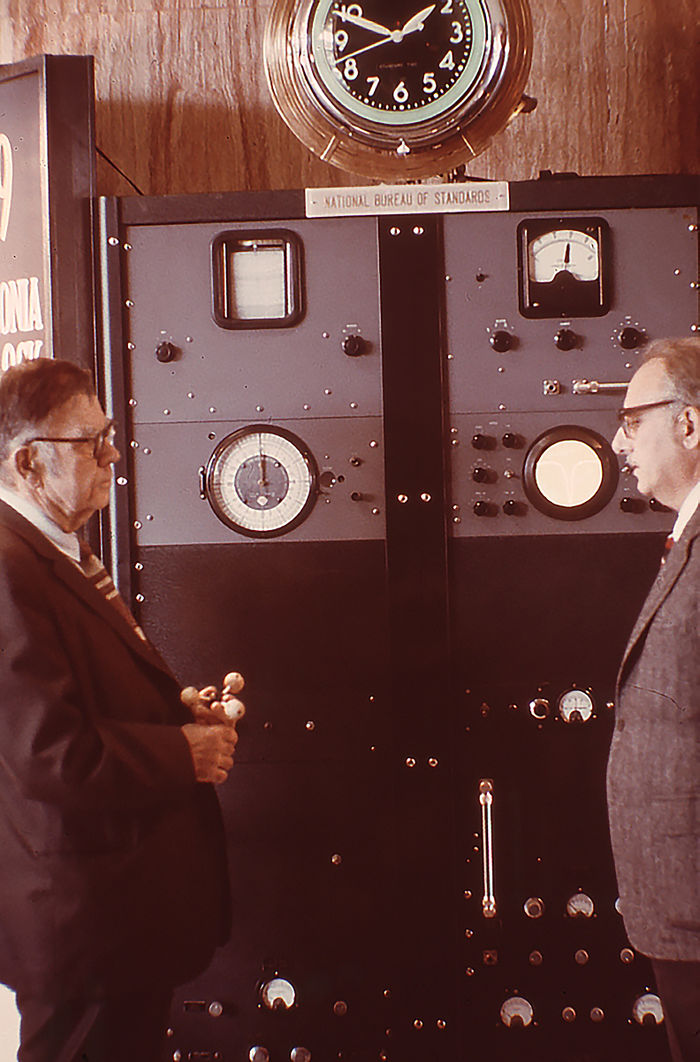 A recreation of the original photo taken on the 25th anniversary of the atomic clock's invention. Dr. Harold Lyons (right), inventor of the ammonia absorption cell atomic clock, observes, while Dr. Edward U. Condon, the former director of the National Bureau of Standards, examines a model of the ammonia molecule (1974). 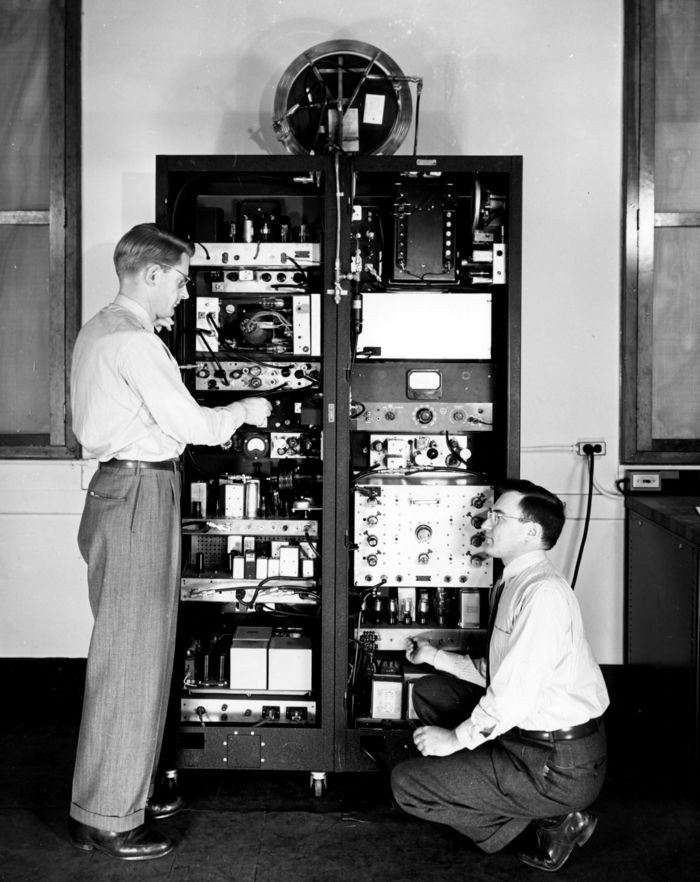 A 1948 photograph showing the backside of the first atomic clock and the electronic components contained inside the two equipment racks. Lyons is kneeling on the right.

The Division of Work and Industry of the Smithsonian Institute's National Museum of American History, holds the first atomic clock, constructed under Lyons’s direction at the National Bureau of Standards in 1948. The photograph shows the clock while on display at the museum.

Lyons was certainly not the first to perform spectroscopic frequency stabilization experiments or to engage in atomic clock research. He was just 35 years old at the time he first demonstrated the ammonia clock to the public in early 1949, and was a 25-year old graduate student when Rabi and his colleagues at Colombia first discussed employing their molecular beam resonance technique as a time standard. However, Lyons and his colleagues were able to rapidly move past the pure experimental stage and become the first to build a working atomic clock.

The construction of an atomic clock in 1948 was a monumental engineering feat. In addition to the ammonia absorption cell, the new invention consisted of a number of electronic instruments including a quartz crystal oscillator, several stages of frequency multipliers, a frequency discriminator, and frequency dividers, integrated into a single system and housed in two large equipment racks. These instruments, along with the expertise obtained by NBS in several decades of maintaining and dissemination standard frequency signals, allowed Lyons to advance beyond what had previously achieved elsewhere. He was able to excite an ammonia absorption cell with the output of a frequency multiplier chain that could be measured against the national standard of frequency, quartz oscillators operated by NBS that were periodically calibrated against the astronomical time standards maintained by the U. S. Naval Observatory. This direct access to the best available time standards allowed Lyons to have confidence in his results and to verify that his new invention was working properly.

A copy of the original journal paper is not available but the text is identical to the following document, which is provided here:

[B3] T. Jones, "Splitting the Second: The Story of Atomic Time," Institute of Physics Publishing, Bristol and Philadelphia, 2000.

Cartoon, "Ripley's Believe it or Not!," King Features Syndicate, 1953. 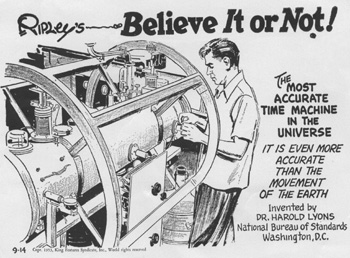 Retrieved from "https://ieeemilestones.ethw.org/w/index.php?title=Milestones:First_Atomic_Clock&oldid=5555"
This page was last edited on 9 August 2017, at 14:11.
Privacy policy
About IEEE Milestones Wiki
Disclaimers