Milestone-Proposal:Invention and First Demonstration of Radar

Demonstration of a Radar Predecessor, 1904

On 17 May 1904, near this site, Christian Hülsmeyer demonstrated his Telemobiloskop: a spark gap transmitter, simple parabolic antennas, detector, and an indicator. It was designed to ring a bell when a barge passed the system at a range of several hundred meters. He patented this device in Germany, the United Kingdom, and the U.S.A. This was the world's first operable device to detect radio reflections, a predecessor of radar. 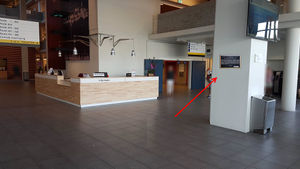 The site is on the western banks of the Rhine, right next to the Hohenzollern Bridge where the original experiment was conducted.

The original demonstration was outdoors

The plaque will be securely mounted on an outdoor wall, protected by a toughened glass window to protect it from the weather and from damage.

The site is fully accessible to the public

The City of Cologne

The German engineer and entrepreneur Christian Hülsmeyer first had the idea to build a device for detecting and locating objects by means of reflected electromagnetic waves, after witnessing a collision between two ships on the River Rhine under conditions of poor visibility in which several people were killed. He founded his own company, raised venture capital and developed the technical concept of a radar system. He also patented his invention (which he called a ‘Telemobiloskop’) and first demonstrated it in Cologne, Germany, in 1904. These were the foundations of modern radar systems which, today, contribute to many areas of our life: not only in military, meteorological and air traffic control applications, but also in geoscience, automotive, industrial and even home applications.

At the time of Hülsmeyer's invention, RF technology was still in its infancy, and the available electronic devices were therefore quite primitive. Nevertheless, he was able to build and demonstrate a working prototype equipment. Two pages from Hülsmeyer’s British patent show the basic form of the equipment: it used a spark gap transmitter, simple parabolic antennas, a crude detector and an indicator to show the presence of a target. The title of the patent was: ‘Herzian-wave Projecting and Receiving Apparatus Adapted to Indicate or Give Warning of the Presence of a Metallic Body, such as Ships or Train, in the Line of Projecting of such Waves’.

Specifically, Hülsmeyer and business partner gave a public demonstration of his radar-like apparatus, an account of which appeared in the Kölnische Zeitung newspaper dated 18 May 1904. The site of the demonstration was next to the Hohenzollern Bridge over the River Rhine, and the experiment demonstrated the ringing of a bell when a barge passed in front of the system at a range of several hundred yards. The experiments and the equipment are described in the excerpts from books by Brown, Pritchard and Swords, and the papers by Bauer and Colin. Other scientists and engineers, including Nikola Tesla and Guglielmo Marconi, had suggested that it might be possible to detect objects using reflected electromagnetic waves, but Hülsmeyer’s work was the first practical demonstration and the subject of the first patents. Despite the evident technical success of the demonstration, Hülsmeyer’s invention was not a commercial success. Later in 1904 he demonstrated it in The Netherlands to various hipping lines and navies, but they were not interested, presumably because it was believed that Marconi’s recent invention of radiotelegraphy would be adequate for their needs. Later, in the 1920s and 1930s, work in various countries developed radars that could detect aircraft, and to measure the height of the ionosphere. By that time RF technology – transmitters, antennas, receivers and detectors – had advanced significantly. Some sources – particularly the British scientist Sir Robert Watson-Watt who developed the British Chain Home radar system in the UK in the late 1930s – maintain that Hülsmeyer’s invention could not properly be called a radar because it did not measure range (the term ‘radar’, standing for radio detection and ranging, had first been introduced in the USA on 19 November 1940). This is not strictly true, since a development of Hülsmeyer’s invention, detailed in a subsequent patent granted on 2 April 1906, did indeed measure target range. In addition, we have no difficulty today in speaking of police Doppler radars – which measure target velocity but not range.

Arthur O. Bauer, Christian Hülsmeyer and about the early days of radar inventions - a survey, Diemen, 2005

4. Arthur O. Bauer: Christian Hülsmeyer and about the early days of radar inventions - a survey, Diemen, 2005 [a detailed description of Hülsmeyer’s work and patents written by a Dutch historian and made available on his website http://www.cdvandt.org/radar_i.htm ]

5. A Special Session at the SEE/IEEE International Radar Conference in Toulouse, France in 2004 to mark the centenary of Hülsmeyer’s invention. Several of the papers are in French, but two in English are:

Retrieved from "https://ieeemilestones.ethw.org/w/index.php?title=Milestone-Proposal:Invention_and_First_Demonstration_of_Radar&oldid=7374"
This page was last edited on 12 March 2019, at 13:55.
Privacy policy
About IEEE Milestones Wiki
Disclaimers