In this building, Heinrich Hertz first verified Maxwell's equations and prediction of electromagnetic waves in 1886-1888. He observed the reflection, refraction and polarization of the waves and, moreover, the equality of their velocity of propagation with the velocity of light. His 450 MHz transmitter and receiver demonstrated the fundamentals of high-frequency technology.

Please give the address(es) of the plaque site(s) (GPS coordinates if you have them). Also please give the details of the mounting, i.e. on the outside of the building, in the ground floor entrance hall, on a plinth on the grounds, etc. If visitors to the plaque site will need to go through security, or make an appointment, please give the contact information visitors will need. The intended site on the campus of Karlsruhe Institute of Technology (KIT) is the Heinrich-Hertz-Auditorium, where Heinrich Hertz performed his experiments. There is a sculpture of Heinrich Hertz on the site (see supporting material, Fig.1).

The plaque shall be mounted outside the Heinrich–Hertz-Auditorium next to the sculpture of Heinrich Hertz.

The plaque site on KIT campus is open to the public.

The generation of electromagnetic waves is one link in a chain of historic milestones connected with the names of Michael Faraday, James Clerk Maxwell, Heinrich Hertz and Guglielmo Marconi. Hence, its historic significance is two-sided. Hertz verified Maxwell´s theory against the then prevailing views of electromagnetic phenomena and at the same time he opened for Marconi the gateway to the new world of radio and wireless services.

Based on the work of Jean-Baptiste Biot, Félix Savart and others the prevailing theory – especially on the European continent – interpreted the electromagnetic phenomena as long-range effects passing instantaneously over the space between charges, currents and magnets. This was supported by the fact that Biot-Savart´s force law showed the same spatial structure as Newton´s law. In opposition to this Faraday postulated his conception of short-range effects in electric and magnetic fields, which propagate with a finite velocity through the space. Maxwell presented Faraday´s conception in mathematical form. As a solution of his field equations he obtained electromagnetic waves propagating with the velocity of light. Hence, Maxwell´s theory asserted the existence of electromagnetic waves and the identity of light with them. However, the question whether this forecast is true or false remained unanswered for two decades.

In 1879, initiated by Hermann von Helmholtz, the Academy of Sciences in Berlin, Germany opened a competition for an experimental decision between the two contrary theories of electrodynamics. But only six years later when Hertz left the University of Kiel and became Professor of Physics at the Technische Hochschule Karlsruhe the solution of this problem seemed feasible to him. Here the laboratory facilities including a pair of so-called Ries’s coils were much superior to those at Kiel and he started his experiments. The main problem was how to obtain reactions with very high frequency. He constructed a resonant circuit with both, very small capacitance and inductance by a dipole loaded with two 30 cm diameter spheres made of zinc sheet. The excitation was realized by a spark discharge in the center of the dipole. This arrangement radiated the electromagnetic waves quite well. With a circular wire, a loop antenna, likewise interrupted by a small gap, electromagnetic waves were received and caused a spark discharge. With this configuration Heinrich Hertz was able to detect electromagnetic waves up to a distance of 18 meters. Hertz finally achieved stationary waves with frequencies of 450 MHz by interference of incident and reflected waves. This made it possible to measure the wave length and therewith the velocity of wave propagation. Moreover he could distinguish electric and magnetic fields and their directions, which was the basis for later radio direction finding. (The original apparatus built by Heinrich Hertz is in the Deutsches Museum, Munich in the permanent physics exhibition.)

Although Heinrich Hertz did not foresee the consequences of his experimental results with electromagnetic waves, with his experiments and his invention of radio frequency transmitters and receivers he accomplished the fundamentals of high-frequency technology. His experiments, including the invented equipment, were the basis for RF application for communication and Radar. Guglielmo Marconi, Ferdinand Braun, Christian Hülsmeyer and many others based their technologies and inventions on Heinrich Hertz’s results. And his name was in 1960 adopted for worldwide use as the SI unit name for frequency: Hz.

Hertz had to invent the essential high-frequency equipment to generate and detect electromagnetic waves, that is emitters and receivers for 40 MHz in the beginning and finally 450 MHz.

After the competition for an experimental decision between the opposing theories of electrodynamics had been opened in 1879 by the Academy of Sciences in Berlin, very probably there must have been great interest and diverse attempts to participate in this. Heinrich Hertz himself instantly seized this task. He calculated the necessary prerequisites for successful experiments but at that time he came to a negative result.

Besides this there had been a number of earlier experiments drawing sparks from conductors in the vicinity of electric discharges (see Charles Susskind, Heinrich Hertz: A Short Life), the earliest already prior to the publication of Maxwell´s Treatise in 1873. In 1842 Joseph Henry already noted the oscillatory nature of spark discharge and presumed that light is an electromagnetic phenomenon. In 1870 Wilhelm von Bezold discovered in his experiments on electric discharge that electricity is transmitted along a wire with a finite velocity. In 1875 Thomas Alva Edison refused the electrical nature of the spark phenomenon and supposed a new force behind it. But this hypothesis was in 1876 experimentally disproved by Eli Thompson. In 1879 David Edward Hughes discovered that sparks would generate a radio signal, but did not report this until later. Moreover, Hughes apparently did not properly understand the operation of the transmissions, which he observed.

However, all these experiments could not succeed in the generation and detection of free electromagnetic waves. In his speech in commemoration of Herrmann von Helmholtz on December 14, 1894 Wilhelm von Bezold stated that this was “kept in reserve to Hermann von Helmholtz´s greatest and most ingenious scholar Heinrich Hertz”. 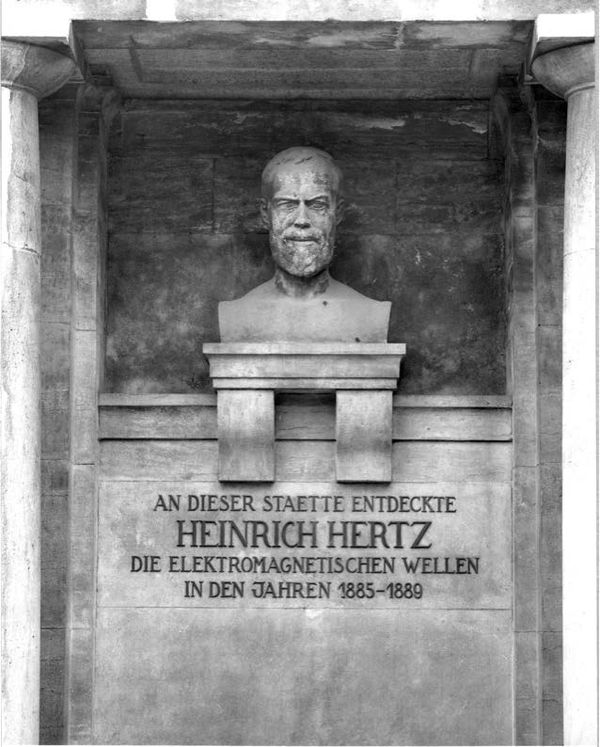 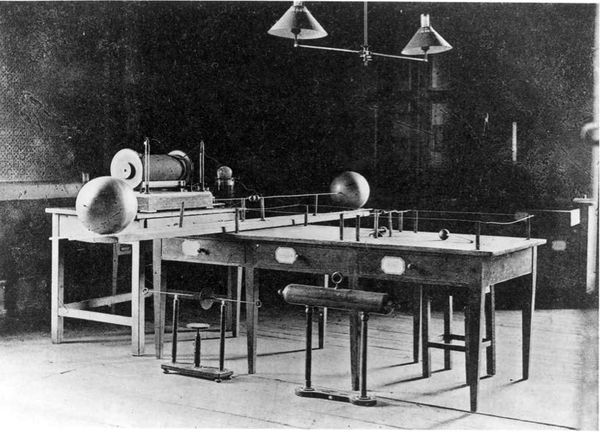 Retrieved from "https://ieeemilestones.ethw.org/w/index.php?title=Milestone-Proposal:First_generation_and_experimental_proof_of_electromagnetic_waves_1886-1888.&oldid=700"
This page was last edited on 27 February 2015, at 18:47.
Privacy policy
About IEEE Milestones Wiki
Disclaimers