Beginner's All-purpose Symbolic Instruction Code (BASIC) was created in this building. During the mid-1970s and 1980s, BASIC was the principal programming language used on early microcomputers. Its simplicity and wide acceptance made it useful in fields beyond science and mathematics, and enabled more people to harness the power of computation.

Please give the address(es) of the plaque site(s) (GPS coordinates if you have them). Also please give the details of the mounting, i.e. on the outside of the building, in the ground floor entrance hall, on a plinth on the grounds, etc. If visitors to the plaque site will need to go through security, or make an appointment, please give the contact information visitors will need. The BASIC Programming language was designed and implemented by two professors of Dartmouth College, Professor John G. Kemeny and Thomas E. Kurtz in the building, Collis Center

On the outside of the building. 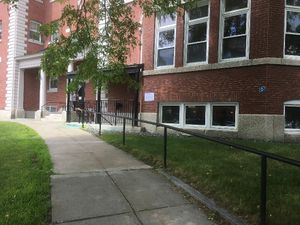 possible plaque location, east side of south façade, under window of computer lab where BASIC was developed.

It will be outside the building.

The era of the early 1960s ushered in a major shift in computing, and the creation of the BASIC programming language was an essential part of that shift. At the time, nearly all use of computers required writing custom software, which was something only scientists and mathematicians tended to learn. Beginner's All-purpose Symbolic Instruction Code (BASIC) had syntax that anyone can learn quickly. Thus, the language became relevant to people in other fields.

BASIC language was designed to allow for time-sharing. Previously, expensive computers could only dedicate batch processing for one program at a time. The infamous punch card had a 24-hour-turnaround interface that limited the access to these powerful machines. As a result, all access to the mainframe was controlled by assemblers. BASIC language helped revolutionize access with HP Time-Shared BASIC, an interpreter software system that allowed many ordinary folks, so to speak, to simultaneously access the computer power on external terminals as if it was dedicated. [1] With accessibility in mind and a desire for the language to become widespread, Professors John G. Kemeny and Thomas E. Kurtz made the compiler available free of charge which was not common for the time. They also made it available to regional high further spreading computer literacy. To further elaborate the simplicity of the language, Ben Shneiderman, a distinguished CS Professor of the University of Maryland College of Computer, Mathematics, and Natural Science, wrote a children’s introduction to BASIC titled “Let’s Learn BASIC” after being inspired by his 8-year-old daughter. [2]

Pushing accessible computing lead to the technical revolution of personal computing. Young Bill Gates, Paul Allen, Steve Wozniak and Steve Jobs all used the BASIC language when they started building their digital empires. Published in the January 1975 issue of Popular Electronics, the Altair 8800 first programming language was Microsoft’s founding product, Altair BASIC. [3] While MITS expected to only sell a few hundred machines, they had a few thousand orders within weeks and thus the Altair BASIC and Altair 8800 are often attributed to the rapid rise of personal computers years later. [4] This set the stage for the microcomputer revolution. And for some time, Microsoft’s Quick Basic was the only programming language available for PCs.

BASIC also played a role in video game development with Steve Wozniak’s influence. Steve Wozniak, as an attempt to create a language intended primarily for games and educational uses, created Integer BASIC also known as the BASIC interpreter for Apple I and Apple II computers. Beloved Apple games, such as Breakout, was developed with this BASIC derivative. During a 1984 interview for BYTE magazine, Steve Wozniak stated that demonstrating Breakout was the “most satisfying day of my life … I knew that being able to program them [arcade games] in BASIC was going to change the world.” [5]

Not only did BASIC have a part in the history of microcomputers and the hobbyist’s interest in personal PCs, it shared a part in simplifying Microsoft’s GUI development. Writing Windows applications was difficult – often taking months to develop with C. Seeking to find an easier method of GUI development, Microsoft contracted the company Tripod to develop a drag and drop system under the code name Ruby. However, Tripod failed to include a programming language at all! Thus, Microsoft paired its beloved BASIC language with Ruby in what would be known as Visual BASIC. Visual BASIC 1.0 was introduced in 1991 by combining the GUI interface generator Ruby with the programming language BASIC. This merge was used in the creation of Windows 3.0 and multiple subsequent Window versions along with other critical and beloved Microsoft applications, including Microsoft Office. Starting in 1991, this language last stable release was Visual BASIC in 1998. However, Microsoft continued its support a decade later. [6]

In summary, it is hard to quantify the impact the Dartmouth BASIC had in Computer Science. The change of placing power into the hands of the end user over system owners was a monumental improvement in the accessibility of computer power to the world. These new users would benefit hugely from their new ability to harness the computation power in their attack on the problems of their widely diverse fields of endeavor. And influence the next generation of great visionaries like Bill Gates and Steve Jobs. Rather than a punched-card 24-hour-turnaround interface, computer power would be brought to the users on the users’ own terms – to each user’s place and choice of the time. But having achieved convenience of access, it required BASIC – an uncomplicated, familiarly structured language interface – to open the door to so many non-computer professionals. Thus BASIC, the creation of Professors John G. Kemeny and Thomas E. Kurtz of Dartmouth College, sowed the seed in freeing professionals and students across fields from the need to become, at some level, “computer experts” if they wished to include computational power in their kits of tools. And those tools were taken and modified to push and flourish the growth of innovations brought by the computational power of personal computers.

Given that the language was meant to be easy to learn, some older computer scientists discredited the importance of BASIC or outright slandered it. Edsger W. Dijkstra wrote in his paper "How do we tell truths that might hurt?" (1975)

“It is practically impossible to teach good programming to students that have had a prior exposure to BASIC: as potential programmers they are mentally mutilated beyond hope of regeneration”

This is the first programming language whose design philosophy emphasized the ease of use. John G. Kemeny and Thomas E. Kurtz designed the original BASIC to enable students in fields other than science and mathematics to use computers. At the time, nearly all use of computers required writing custom software, which was something only scientists and mathematicians tended to learn. Due to easy of use, this help usher a new wave of computer scientists such as Steve Wozniak and Bill Gate who built their silicon empires on BASIC.

Back to BASIC: The History, Corruption, and Future of the Language by John G. Kemeny, Thomas E. Kurtz (1985)

[4] March of the outdated machines https://www.newscientist.com/gallery/dn17805-computer-museums-of-the-world/ 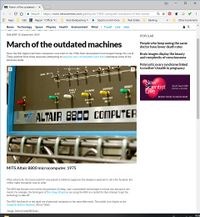 Retrieved from "https://ieeemilestones.ethw.org/w/index.php?title=Milestone-Proposal:BASIC&oldid=8087"
This page was last edited on 7 October 2019, at 15:31.
Privacy policy
About IEEE Milestones Wiki
Disclaimers