Milestones:Electric Lighting Of The Kingdom of Hawaii 1886-1888

In November 1886, electric lights illuminated Iolani Palace's grounds for King Kalakaua's 50th birthday celebrations. By March 1887, the Palace had 325 incandescent lights installed within its 104 rooms. The king's action promoted economic development and accelerated implementation of electric lighting of the town of Honolulu on 23 March 1888.

The plaque is to be mounted on a wooden frame so that The Friends of Iolani Palace may hang the IEEE Milestone plaque inside Hale Koa Gift Shop housed inside the Iolani Barracks during Phase I of the initial installation.

For Phase II, The Friends of Iolani Palace plan to mount the IEEE Milestone plaque in the basement galleries within Iolani Palace as part of an exhibit detailing King Kalakaua's legacies.

Phase I. Iolani Barracks (or Hale Koa) is open to the public Monday through Saturday. Phase II. Iolani Palace is open for public tours Monday through Saturday. Tickets for guided tours of the palace interior are available by advance reservations (fee charged) and located in Hale Koa. Both buildings are secured, manned during operating hours, and locked after hours. For further information, call the Friends of Iolani Palace at (808)522-0832 or visit website: www.iolanipalace.org

A king's foresight and achievement, one who was fascinated with technology in the world stage, traveled thousands of nautical miles to visit the International Exposition of Electricity in Paris as part of his World Tours on 15 August 1881, then met with Thomas Edison the inventor of the light bulb in New York City on 26 September 1881 only 2 years after the invention, spent his own funds for the electric lighting project at Iolani Palace, resulted in 325 incandescent lights illuminating the interior of the Iolani Palace in early June of 1887--four years before the White House had electric lighting. The Town of Honolulu was lighted by electric lights on 23 March 1888. The king's action inspired the technical industry and accelerated implementation of the new technology in the Kingdom of Hawaii then and the State of Hawaii today. This award acknowledges King Kalakaua's foresight and achievement in bringing electric lighting to Hawaii. 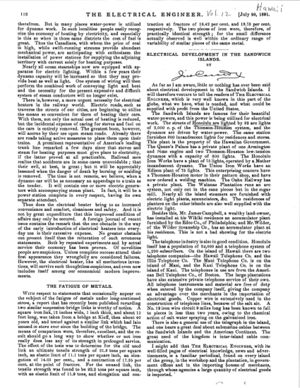 A king's pioneer work in bringing electric lighting to Iolani Palace in early June 0f 1887 and to the Kingdom of Hawaii 4 years ahead of the White House. This also created Hawaiian Electric Company. Iolani Palace is the only royal residence and Palace in the United States and a registered National Historic Landmark. When the Milestone Award is approved, IEEE can open doors for a world renown historic landmark to educate the general public, international visitors and world-wide audience how Hawaii championed Electric Lighting years ahead of many other cities outside the Northeastern part of the United States.

Chronological Events: 26/09/1881 – The Sun Article “Kalakaua visits Edison” describes King Kalakaua visit to Thomas Edison’s headquarters in 5th Avenue, New York to investigate electric lights to replace kerosene light in Honolulu. The King was undecided between gas or electric lights but resolved to wait until electricity has had a full and practical trial. [1-King visit Edison] 22/07/1886 – The Daily Bulletin Article “Electric Light” states 5 lights provided at various location near the palace grounds demonstration. [2-Iolani light demo] 18/09/1886 – The Daily Bulletin Article “The Legislature” changes to Electric light bill from “C.O. Berger & Associates” (Brush Electric) to “Ministry of Interior is hereby authorized to grant unto any person, associations of persons, or corporation the right” to maintain electric works and to light the City of Honolulu with electric lights. Changes required to avoid additional charges due to patent infringements from [Thomson-Houston]. [3-Seq-4 charlesberger] 19/11/1886 – The Daily Bulletin Article “The Electric Light” Ten arc lights of 2000 candle power each arrived Wednesday by steamer. Electrician D.P. Smith and assistant A.W. Smith to install lights. [4-seq 3 palace lighting] 26/11/1886 – The Daily Bulletin Article “The Jubilee Ball” The Jubilee Ball 8pm to 11 or 12am featured electric lights at the entrance to and exit from the Palace grounds, making the streets at the outside of the enclosure as well as drives and walks inside almost as light as day. [5-Jubilee lights] 03/12/1886 – The Daily Herald Article “Coming to the Light” discuss Legislature cited “There are not at the present time a single city of any size lighted entirely by electricity”. [11-seq-2 herald 18861203] 08/02/1888 - The Pacific Commercial Advertiser Article “The Electric Light” W.O. Faulkner states two circuit – one arc lamp and other incandescent lamp. Standard light being 2000 candle power. Dynamos to be run on water. And 7-10 HP required for each 2000 candle power lamp. [8-seq2 adv 18880208] 21/03/1888 – The Daily Bulletin Article “Honolulu Electric Works” energized dynamos after receiving turbine wheels manufactured by Leffel & Co., Springfield Ohio, under 135 psi. Armature turning about 900 times a minute. Dynamos and lamps were supplied by Thomson-Houston Co. of Massachusetts, [which eventually became General Electric]. Larger dynamo “Harry” supplies power to 50 arc lights and a smaller 8 year old dynamo “Billy” supplies power to 12 arc lights hung around the room. There were 12 older lamps showing corrosion. [6-Honolulu Electric Works] 24/03/1888 – The Daily Bulletin Article “Electric Lighting of Honolulu” Energized two circuits run by a large and small dynamos at the Electric Light Station [hydroelectric plant] in the [Nuuanu] Valley. Long circuit is 15 miles and short is 6 miles on 46 poles. [7-seq – 3 nuuanu hydroelectric] 26/03/1888 – The Pacific Commercial Advertiser Article “A New Danger” reports accident occurred when wires contacted a tree. Another Article “The Electric Lights” reports two circuits – one 15 miles and other 6 miles. Dynamos run by water and pressure at water wheel is 130 psi. The lamps are 2000 candle power each. [9-seq2- 2 adv 18880326] 01/08/1888 – The Pacific Commercial Advertiser “The Legislative Assembly” under “Afternoon” Report of Committee, Appropriation bill additions to electric light system, Honolulu $43,000. Reports of the existing system, “The power for running the electrical works is obtained from the water pipe that supplies the town of Honolulu with water. A turbine wheel is used to run the dynamos. The water passes on from the wheel into another large pipe through which it is conducted on down the valley for distribution through the town. The present system cost up to March 31, 1888 $42,746.45 and the running expense is about $8000.” It is proposed to ask for an appropriation of $43,000 to purchase and erect one more 50 light arc Dynamo, in order to complete the system for lighting the streets of Honolulu – also two incandescent Dynamos to furnish lights for the dwellings of the town. The cost of additional arc dynamos for streel lights will be about $13,913 and additional expense for running the same will be $1080. The cost of the two additional incandescent dynamos will be about $28,441 and the additional expense of running the same $1700. The total receipts from the incandescent lights are estimated at $12750. The article states “At present there is not a sufficient water supply during the summer to furnish the necessary power to run the additional dynamos; but by constructing storage reservoirs above the electric works, which is really necessary in order to meet the increasing demands for water in Honolulu, sufficient power can be readily obtained.” [10-seq 2 adv 18880801]

Retrieved from "https://ieeemilestones.ethw.org/w/index.php?title=Milestones:Electric_Lighting_Of_The_Kingdom_of_Hawaii_1886-1888&oldid=6151"
This page was last edited on 26 March 2018, at 14:34.
Privacy policy
About IEEE Milestones Wiki
Disclaimers